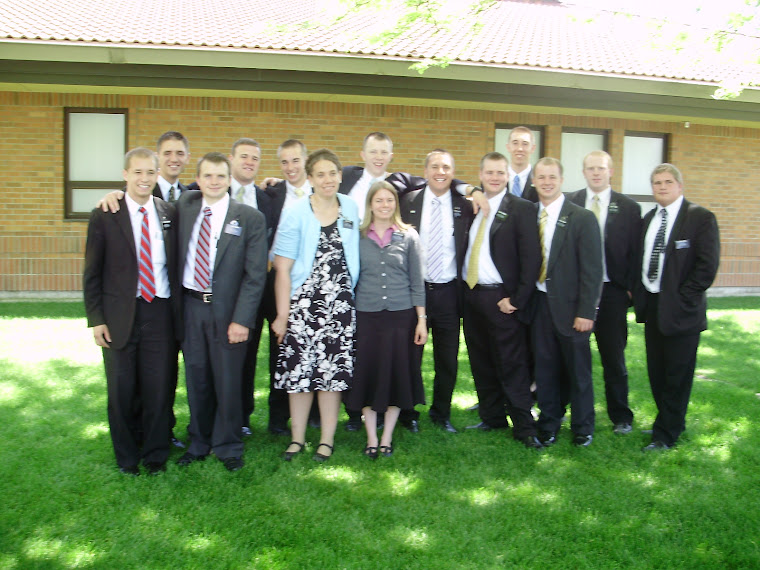 This last week was amazing. So many miracles. We prayed and went to work. Invited and rejection but at least they are thinking about it.

Tuesday- Exchanges with Sister Maxfield. She is just beginning her journey and was trying to gleam all she could from me. We made a great team. She's just full of energy. We taught Kierra and she was a blast. The Spirit kept telling me to wait 45 minutes and I decided it was time to go. Loaded the truck and leaving the park and down comes Kierra. Perfect timing. She was totally opening up and the Spirit was so strong. She would relate to Lehi. It was amazing as we just read with her. Drove back to meet with Mary. She didn't bail out on us a couple weeks ago. That was a relief. Showed the movie Joseph Prophet of the Restoration. It really bothered her that she was connected to Joseph. It seemed this week was exactly what we learned at Zone Conference to take their hands and place it on the iron rod. It was incredible.

Our Journey down to Spokane was uneventful. It just took a little more time than expected. I was thrilled to be driving in traffic again. =)

It was awesome to see so many missionaries that I know again. It was a blast to reconnect and get pictures afterward. Inspections of vehicles. They skipped ours. So we didn't end up leaving till 6pm. But it was amazing to be taught by another general authority. I really enjoyed and took notes of all the kind words we spoke of President and Sister Palmer. It was awesome to be back with Sister Hilton. She had a lot to talk about being gone for 24 hours.

Invited gloria to church and to be baptized. She declined both invites but agreed to start reading the Book of Mormon. When her husband Bob was told that we asked her to get baptized- Ask are you? and Why not? Even though he doesn't meet with us he is the greatest encourager we have.=)

Friday was a day of testimony. After dropping in on John and Judy and sharing 2 Nephi 29:7-11 Judy says she knows that's true. One step everyday! She even has a referral for us.

Michael's lesson was even more eventful. This young man Sean, knocked on the church doors to play the piano. We agreed and asked him to join us. He did after playing the most beautiful music. Michael turned to him and bore his testimony that this is true and his life has changed because of it and he should listen. We were so proud not to mention Michael accepted another baptismal date of Nov. 20th! We found out Sean is homeless and invited him to learn more, come to conference, and read the Book of Mormon. Which he responded I am not a Mormon. Sister Hilton shared how its for everyone to read. It was fantastic.

Saturday- We did service at the museum. The community members actually talked to us who were there for National Museum Day. It was incredible and such a productive use of time.

Mormon.org training Sunday with Bishop Peper was out of this world. Our adaptions to make it more user friendly paid off. At the end Bishop Peper turned the time over to me. It was intense. I implemented what President Palmer does, so now what? It was incredible to see the participation and excitement to use this new missionary tool.

Excited for another week.

Love and miss you all.

Posted by Sister Rhonda Peck at 7:51 AM

Sister Rhonda Peck
Sister Peck will be serving in the state of Washington and will be reporting to the MTC on April 28, 2010. This blog is to keep you updated on her adventures as a missionary for the Church of Jesus Christ of Latter-Day Saints.

***REMEMBER*** Rhonda is allergic to wheat, milk and rice.

:10 Who can find a virtuous woman? For her price is far above rubies.
:30 Favour is deceitful, and beauty is vain: but a woman that feareth the Lord, she shall be praised.
:31 Give her of the fruits of her hands; and let her own works praise her in the gates.